Sometimes we come across amazing stories that we get to do special pieces for! Please read below for one that we got to make special music cuff links. 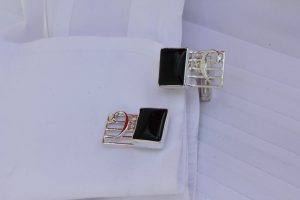 In the summer of 1972, I had just finished my freshman year at Allegheny

by local teachers. Each day we drove station wagons to collect and drop off the kids.

Anthony Warner was one of my five 9-year old boys. That was the age I had started

piano, and at 19, I considered myself a pretty serious classical piano student. So when

piano, I noticed. When I asked him about it the next day, he said he wanted lessons,

but his foster mother couldn’t afford them.

Anthony was a kid ripe with an uncanny creativity, sensitivity, and desire to

learn. We started meeting on his side porch at 10 am every Saturday morning for

piano lessons. His piano was troubled: several of the piano keys around middle C

didn’t work, so we had to transpose his songs higher up on the keyboard. When he

eventually performed in his grade school talent show, he was amazed at how nice the

pieces actually sounded in their proper register. It snowed in winter, and it was cold

on the unheated side porch, but Anthony practiced regularly and rendered his lesson

wearing old gloves with open fingertips. He loved concerts, so I took him to programs

at the college, to Philharmonic concerts in Erie, PA, and even to the big amphitheater

in Chautauqua, NY. I left Allegheny College in 1975, losing myself in nine years of

Thirty-two years passed. Then, one December day, after returning from lunch, I

found a phone message from Italy – it was Anthony – he’d been looking for me, and

asked me to email him. I locked the door to my office, waited for the emotion to

subside, and began to type. We exchanged voluminous emails, and then finally came

together when he visited the states for a business meeting. When he was 19, he had

struck out on his own, moved to Washington, DC, and eventually joined the Air

Russian, and American Sign Language. He spent most of his adult life in Europe

and  inspections in Eastern and Western Europe.  He lived 10 years in Germany,

where he acquired a grand piano, and shuttled back and forth to Moscow, attending

concerts at the Moscow Conservatory. He now lives in Italy, near Venice, where art

and music remain an important part of  his life.

Anthony’s successes were accompanied by many hard times. He told me that

his love of music carried him through those hard times, and that he wanted to thank

me for fostering that love as a child. But that was only the beginning of his gratitude.

For several summers, I had had a summer music festival consisting of 8-10

each evening, and then performing concerts at week’s end. In 2009, our festival was

threatened by several kitchen injuries. When Anthony heard of this, he vowed to come

in 2010 to do all the cooking while we kept our fingers to the instruments. Then, in

2011, he invited our festival to Italy for two weeks, putting us up in his home, feeding

us, and arranging concert venues. Last year the musicians numbered 13, (including a

in four Italian cities. Last summer, Anthony introduced me to Cristina Nadal, an

Pre-Academic Courses at the G. Tartini Conservatory of Trieste, Italy. I visited the

recording studio of Paolo Carrer, where she made her new CD, In Volo (“In Flight”),

in which she beautifully expresses her skills as cellist and soprano.

This week, Anthony is bringing Cristina and Paolo to Greenville to perform at

Winterville NC). We will then travel to perform in my home town of Erie, PA, where

we’ll be joined by two from last year’s Italy tour: Gayane Grigoryan, a violinist who

studied here at ECU, and Elizabeth Etter, a pianist/harpsichordist who performed here

in 2007. The  final concert will be in  Meadville, PA, home of Allegheny College,

School neighborhood, and bring them a full concert of classical music at the Unitarian

Church. The kids are busy creating invitations and planning a big reception for

Music glues us all together – over time, over continents, and over our age

differences. Anthony’s generosity grew out of his gratitude for the joy of music. The

famous cellist, Pablo Casals, expressed a similar insight when he said, “Perhaps it is

music that will save the world.”